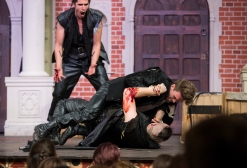 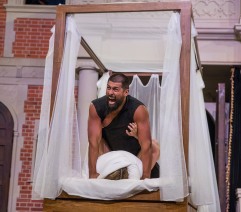 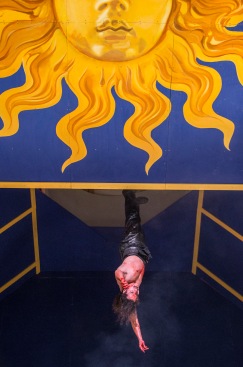 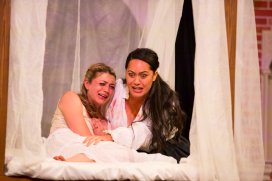 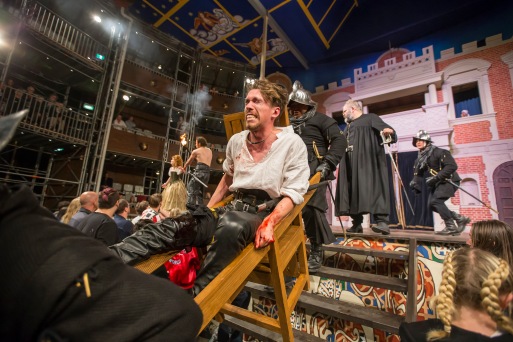 The ANZAC’s Farewell to Egypt 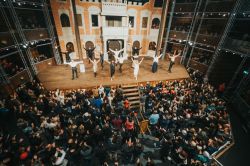 In our work for the Queens Company at Pop-up Globe, making this production in rep with Much Ado About Nothing, Much Ado‘s director Miriama McDowell, costume designer Chantelle Gerrard and I explored an aesthetic which, in the postmodern spirit of the theatre itself, clashed the period with the contemporary, and European with Pacific. We aimed to create a pair of complementary productions which Shakespeare and his company would have understood visually, but which also felt entirely at home in the southern hemisphere in the third millennium. Miriama’s joyous, exquisite production of Much Ado reframed Messina as a Pacific island, and in so doing discovered an authentically Pacific Shakespearean style, with singing and movement traditions of waiata and siva, and costumed in white, off-white and floral colours.

Othello, too, is a play set on an island, in a storm. Associate director and choreographer Megan Adams and I worked extensively with imagery of ships and sea to bring the globe to Pop-up Globe. Our company was itself global: Aotearoa, Samoa, England, Scotland, Norway, Germany, the United States and Turkey met in the persons of the company. Megan’s movement direction combined Pacific social custom with Renaissance formalities, with the devil-may-care culture of the ANZACs (replete with an uncomfortably offensive WW1 song), the martial physicality of the All-Blacks, and with Maori ritual and physicality (hungi, haka and karakia). The Southlander (Te Kohe Tuhaka as Othello) encountered the Norseman (Haakon Smestad as Iago); English feist (Jasmine Blackborow as Desdemona) was stoked by Maori fire (Roimata Fox as Emilia).

The production deliberately pushed at issues of colonialism and nationalism. Associations with the ANZACs and the All-Blacks, two sources of huge national pride, were tested respectively by the performance of racism and toxic masculinity. In the context of contemporary New Zealand, continuing to come to terms with the pervasive effects of its colonial past, these provided explosive moments. Othello is an extremely confrontational play, and was so in its day; the relationship the play has with its audience (mostly through Iago) is itself both crafty and malicious, inspiring complicity in evil. Our aim was to push the audience throughout: to clap along enthusiastically to a racist song, until it dawned on them that it was racist; encourage the drinking, until it turned nasty; cheer the fighting, until blood was spilled.

The colonial context of the play, evident throughout, reached an electric climax in the final scene, in the moments when Emilia and Othello discover Iago’s role in the events of the play. The repetitive “My husband? … Thy husband?” dialogue was played in te reo Maori, the actors in their heightened states of emotion slipping into their mother tongue. The Maori language is at the heart of New Zealand’s efforts to address its past, and is now learned by many pakeha (European) Kiwis; this sequence, at the emotional climax of the play, exerted a powerful narrative of Shakespearean ownership even as the speaking characters encountered the depths of despair.

Chantelle’s visual score underlined the moral context of the play by using mono-chromatic and primary colour schemes, highlighting doctrinal allegory in the text with archetypal character palates. The production’s conception relied on the Renaissance understanding of the operation of evil as being the work of the Devil incarnate, with early modern cosmological ideas encoded in the performance in ways instantly recognisable to a contemporary audience, through the choreography of elemental materials: fire, water, wood, sand, blood and wine; and by an anti-deus ex machina at the end. Haakon came up with the idea for this last, literally breathtaking theatrical moment, and then had the unbelievable courage to carry it out: a fifty-foot ascent into the heavens, upside down.

From September 2017 – February 2018, the production ran at PUG in Melbourne, Australia, with Regan Taylor taking over from Te Kohe Tuhaka in the title role, and with Simon Prast as Brabantio/Gratiano.

Throughout its Auckland and Melbourne seasons, the production featured four former students from MA Acting at Central: Jasmine Blackborow as Desdemona, Daryl Green as Cassio, Kieran Mortell as Roderigo, and Haakon Smestad as Iago – all of whom are deservedly acclaimed in reviews of the production:

Australian Arts Review – “The cast of Othello navigate both the emotional landscape of the play and the physical landscape of the Pop-Up Globe space extraordinarily well … Director Ben Naylor and his team have made something brilliant and unique.”

NZ Herald – “An intensely emotional staging  … no holding back as director Ben Naylor presents a vigorously physical, blood-soaked interpretation of a play which has acts of appalling cruelty mingling with exquisite poetry.”

Australian Stage – “As satisfyingly dramatic and spectacular a production of Othello as you’re likely to see.”

Theatrescenes – “This is, first and foremost, an attempt to faithfully realise the text as is … a highly respectable production of Othello, embracing the sadistic glee of the play.”

Weekend Notes – “The enjoyment was instant from the minute the nervous and easily manipulated Roderigo runs in looking for someone to console him over his unrequited crush … Each of the characters was masterfully executed.”

An interview with me about making the show:

This Instagram page has some really charming fan art of the production’s central characters. And this is a really lovely essay about the production by a serious Shakespeare fan.

And here is a TV news snippet about one particular night at the production, which turned out to be one of the most moving nights of my theatre career: Gabriel Wharehinga, a young actor facing a tragically early death, came to visit us.