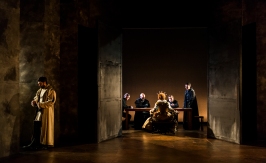 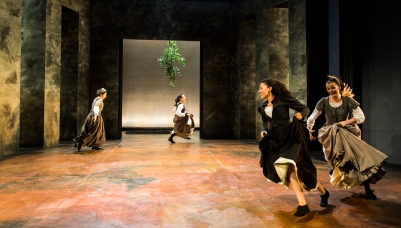 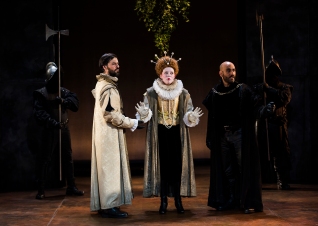 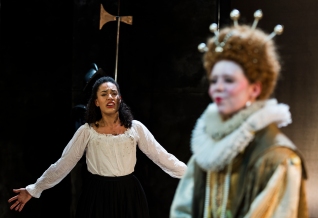 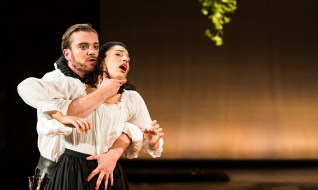 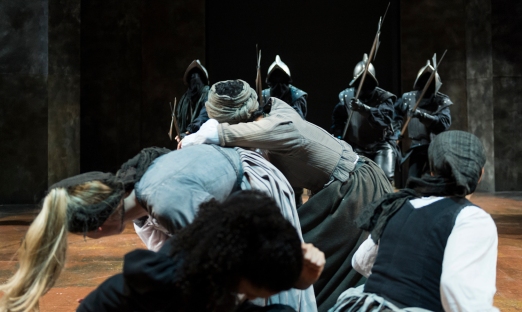 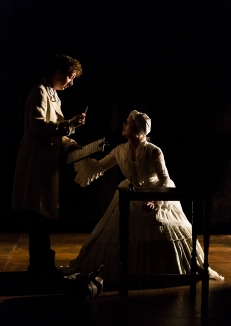 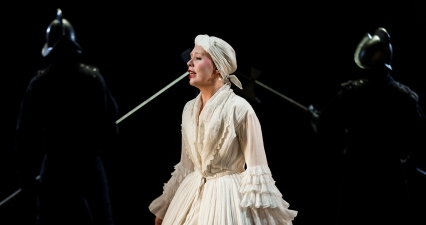 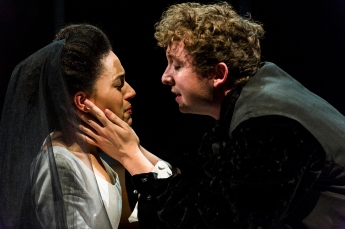 Unsatisfied with published translations of Schiller’s masterpiece, I took a deep breath in the winter of 2015-16 and wrote this adaptation myself, in verse (or rather, moving between iambic pentameters, free verse and occasional prose), working from the 1801 translation by Schiller’s friend Joseph Mellish. And I was lucky enough to make the resulting production with some brilliant friends of my own: my frequent collaborator Anna Healey, my old friend David Hermann, and my wife Liraz Chamami.

This was also the first of two collaborations (the other being The Devils) with the extraordinary visual team of Max Dorey (set) and Josh Gadsby (light). I think the pictures above show how exquisite their work on this production was, as well as the elegant and sophisticated contribution of Chantelle Gerrard (costume).

Conceptually, it was all very simple, the huge upstage doors ominously dominating a mostly bare space. The considerable scale of the playing area required an urgent and physical acting style, for which we drew upon both romanticism and contemporary German theatre; and among a talented cohort there were some truly exceptional performances, particularly Katharine Bubbear and Aamira Challenger as the queens.

In two of the other most memorable characterisations in the play, there was certainly a political agenda. When writing Davison, the only-following-orders paper-pusher who enables evil, I’d quite consciously based him on Adolf Eichmann; Rowan Williams inhabited the hapless and spineless monster chillingly and simultaneously sympathetically. And making a more immediately contemporary connection, in playing his boss Burleigh, the brilliant Tom Macqueen deliberately and persuasively channelled Michael Gove.

We were making this production during the run-up to the EU referendum of June 2016, and in the immediate aftermath of the result. The play’s particular resonance at that moment was much on my mind; I took the unusual step, for me, of writing a programme note. Since it still expresses much of how I feel about the production and its timeliness, I’ll reproduce it here:

As so often in theatre, events conspired to retroactively bestow political significance on this year’s choice of production for MA Acting, rather than the choice deliberately responding to events. When in the winter I settled on Mary Stuart, as with every play selection for MAAC students, it was with the specific character and skills of this year’s cohort in mind, rather than to make any overt political statement.

Working on the adaptation in the early spring, I was certainly mindful of the fact that we would be rehearsing during the immediate aftermath of the EU referendum; though like most of us, I in no way anticipated the outcome, nor its extreme effects on our political life. On the 24th June, though, at the end of our first week of rehearsal, lines which I had written without particular notice of their contemporary relevance suddenly stood out as direct responses to the new political world we found ourselves inhabiting.

This need not be surprising; after all, the play concerns historical issues, personalities and events which directly relate to this summer’s upheaval: the ‘Auld Alliance’ between Scotland and France; the Stuart dynasty whose political project was Union and yet whose excesses led to the Civil War and the establishment of Parliamentary sovereignty; the geopolitical relationship of Protestant England and Catholic Europe; and the political expediency of English isolationism at a time when the continent was racked by schism and conflict.

While my own allegiances are, like most of the artistic and academic community’s, firmly on the side of remaining in the European Union, this adaptation of Schiller’s great political drama attempts to make no simplistic argument; it is, I hope, a discussion and examination of some of the issues at stake, rather than being didactic. The play is also, after all, a high Romantic tragedy, concerned with personality and psychology as much as with politics or philosophy.

But in making this production, I couldn’t escape the play’s quintessentially European nature: a German play about Scots, French and English characters, written by the very poet whose ‘Ode to Joy’ has been repurposed as the anthem of the European Union. For me, it is as much an homage to our shared European history and sensibility as it is a lament for what I hope will be but a momentary madness, in forgetting that we all share a destiny too.

Blog reviews of the production can be found here and here.

A sample scene from my adaptation (the famous – and fictitious – encounter between Mary and Elizabeth 1 at Fotheringay) is here.

Production trailer, made by Peter Wilkinson of Blind Crow Pictures: