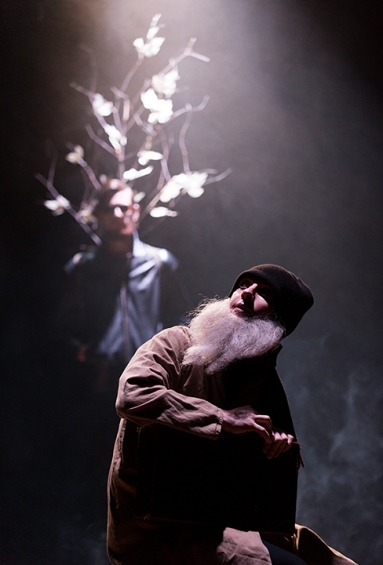 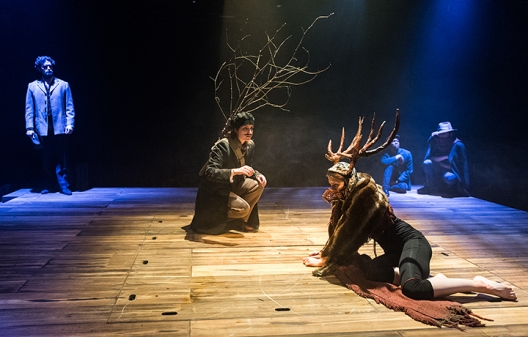 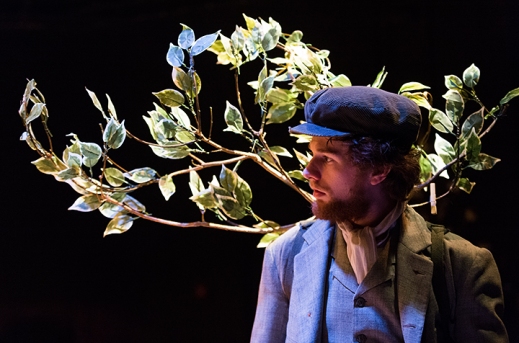 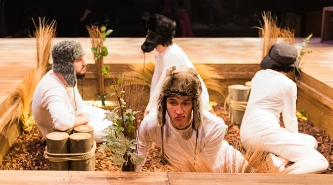 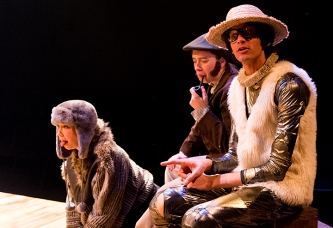 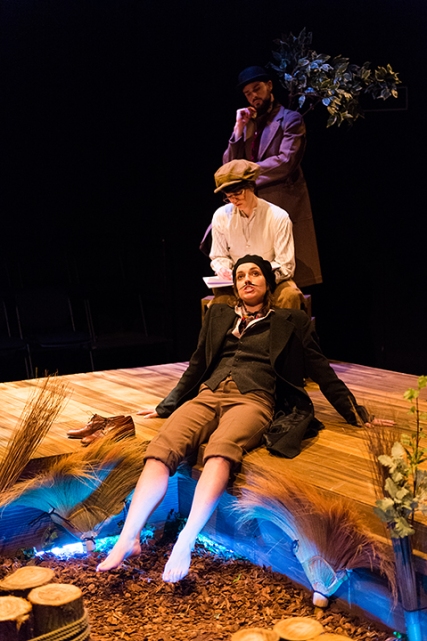 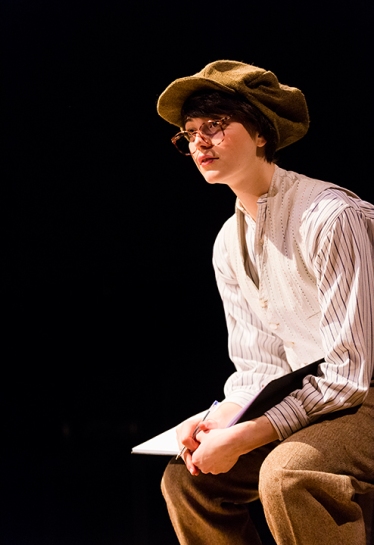 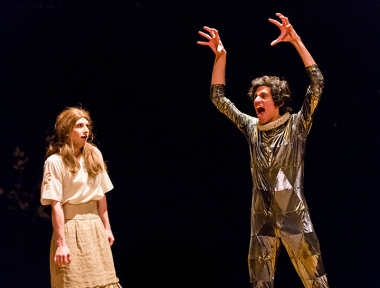 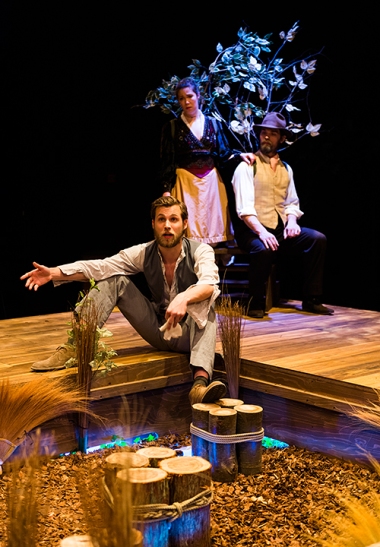 The Serpent in the Garden: Sir Oliver Martext (Kerry Hall) 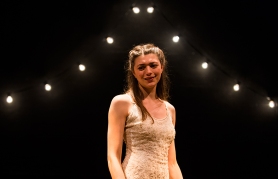 This in-the-round production of Shakespeare’s comedy was an absolute blast to make – perhaps the most playful and improvisational process Anna Healey and I have curated. We used an eclectic setting: the Court scenes, centered around the wrestling match, drew inspiration from Fight Club (complete with the obligatory slo-mo punch, a beautiful piece of ensemble technical and creative work sculpted by the brilliant Rachel Bown-Williams). In Arden we harked nostalgically back to an age of innocence through Edwardian-with-a-twist costumes, of the last rose-tinted historical period we can associate with a prelapsarian state.

The rehearsal process was driven by extensive improvisation and animal work. The actors played a variety of flora and fauna: trees of different seasons and indeed of different characters, wounded deer, quizzical sheep and a truly loveable dog – as well as their primary roles; and in keeping with the play’s dizzying bending of gender, in Arden characters were played by actors of the opposite sex.

The production used Biblical imagery – of the apple and the serpent in Eden – to elucidate subtly the play’s allegorical elements, sculpted by Ed McKay’s dream-like and elegiac lighting. A hard-edged digital rave-core music/soundscape in Court, designed by Reformat‘s Luke Pajak, gave way to traditional folk music performed live and acoustically in Arden, with a folk-disco-twist at the end from Bellowhead‘s Paul Sartin. What else for a play that’s primarily designed to make the audience feel good when they leave the theatre?

At the time of making, I wasn’t aware of a context beyond the very personal one, of simultaneously organising with my wife, our wedding; a project joyously germane to the matter of also making a production of this play which is so essentially about learning to love. Not just falling in, but learning to.

In retrospect though, I think the production, to which the whole company contributed organically, was very attuned to ecological crisis. The actors, after all, spent extensive time embodying their environment – as Duke Senior says, “this our life … finds tongues in trees”. In envisaging our stage (all the world) as a little Eden, we addressed its fragility and impermanence – which, is, of course, the core of Jaques’ speech.

The things I was proudest of in this production were all collectively and collaboratively developed. For instance the journey (devised with the excellent Simon Rodda) we found for Adam’s character, who disappears – without ever being explicitly said to be dead, halfway through the play. Its culmination was the ‘Adam’s Apples’ moment above, as the famished and ancient Adam, who has been trying since the beginning of the play to pick apples from capricious trees and failing, is presented just before the interval with a tableful of them. Each of the actors owned their roles whole-heartedly. Hephzibah Roe doubled the human Phebe with an exceptional sheepdog (also called Phebe, and naturally belonging to Silvius), so effortless and inhabited that I absent-mindedly and mortifyingly patted her on the head while giving notes to other cast members. Gemma Clough’s Corin was so perfect a study of an elderly rural man that many audience members were fooled into thinking she was one. Paula Rodriguez’ gitana-conquistador Jaques, Blake Kubena’s warm, sad, welcoming Senior, Jasmine Blackborow’s witty, doubtful (nevertheless, she persisted) Rosalind, Ross Virgo’s oleaginous Frederick, Maria Lovelady’s catty, hearty Celia, Simon Prag’s haunted tree, gnarled with pent-up fury. So many delights.