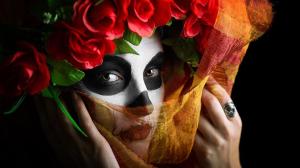 Each day of rehearsals for The Rover feels like a workout. Last year’s MA Acting show, The Devils, contained an absurd number of technical cues – in the midi’d-360s, I think. This year’s The Rover contains at least as many complications and improbabilities. Solving its stylistic and dramaturgical puzzles is at least as hard as the hardest thing I’ve done …

As the media’s flames began to dance merrily around the feet of the patriarchy this autumn, I had a shameful revelation. Shameful in itself and shameful too that I hadn’t hitherto been aware of it.

I haven’t ever directed a play by a woman.

I should pause on this. I suppose, the fact that I make all the productions I make working very closely with women, has allowed me to either unconsciously ignore or subconsciously excuse that fact. (It’s no excuse.) Dead men roam unchallenged around the margins of my work.

High time to do a play by a dead woman, then. I’ve always known about Aphra Behn, never made her acquaintance before. Virginia Woolf wrote of her:

All women together, ought to let flowers fall upon the grave of Aphra Behn… for it was she who earned them the right to speak their minds… Behn proved that money could be made by writing at the sacrifice, perhaps, of certain agreeable qualities; and so by degrees writing became not merely a sign of folly and a distracted mind but was of practical importance.

Behn is an extraordinary character. Her background is mostly obscure, contradictory; she spent time at the fringes of the early English colonial project in Surinam, travelled widely, may have been a spy. As well as being the first professional female playwright in English, she wrote one of the first novels, Oroonoko, a plea for racial tolerance. No saint though: an unashamed elitist and anti-Semite – sharing, indeed, certain disagreeable qualities with her later admirer.

So, Anna Healey and I will be making The Rover with the 2018 MA Acting (Classical) cohort at Central, April 17-20 in the Webber Douglas Studio. We’re delighted to be working once more with Manuela Harding, Ed McKay and Dan Balfour. Booking details to follow shortly … 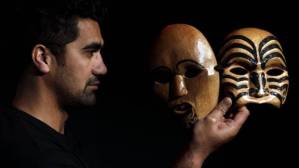 I’ve just returned from Aotearoa/NZ, where I’ve been re-rehearsing Othello for a season in Melbourne, Australia. We had to say goodbye to Te Kohe Tuhaka due to other commitments, but I was absolutely delighted to introduce the brilliant Regan Taylor to the title role. We found Regan through his extraordinary and innovative one-man version of Othello, performed with Maori masks. He’s one of the most interesting and creative actors I’ve had the good fortune of working with, and I think his performance is going to be very special indeed. You can book tickets to the Melbourne run of the production, which was highly critically acclaimed in its Auckland incarnation, here. Pictures and reviews of the Auckland show are here.

I’m about to head back to Aotearoa/New Zealand to direct the remount of Othello for a limited season in Melbourne, Australia. Pop-up Globe will be popping up by the Sidney Myer Music Bowl in Kings Domain. Booking is now open until November 2017. 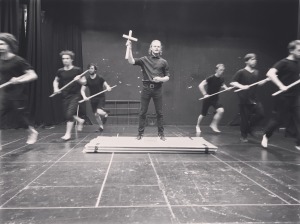 This production is wildly ambitious, technically complex, mentally exhausting and creatively stimulating. I’m working with a brilliant team and company. Come see it. One of the actors, the excellent James Haxby, put together some questions for the production’s WordPress page which made me write in a focused manner about the work. It’s here.

Having just returned from an incredible experience making ‘Othello’ for the second season of Pop-up Globe in Auckland, New Zealand, I’m delighted to be starting work on my next project at Central, ‘The Devils’ by John Whiting. My dear friend and frequent collaborator Anna Healey and I will be adapting and directing, with set by Max Dorey, costume by Manuela Harding, light by Joshua Gadsby and sound by Dan Balfour.

The production will play in the Embassy Theatre at Central, 26-29 July at 7pm with matinees at 2pm on the 27 and 29. Tickets can be booked here.

I’m absolutely delighted to be returning to New Zealand in January to direct Othello for the second season at Auckland’s brilliant Pop-up Globe. I’ll be working again with composer Paul McLaney and costume designer Chantelle Gerrard, both of whom I worked with on Romeo and Juliet at PUG last year (Chantelle also designed costumes for Mary Stuart at Central this summer).

The season will feature two in-house acting companies. For the Queen’s Company, Othello will play in rep with Much Ado About Nothing directed by Miriama McDowell, who appeared as Lady Capulet in Romeo and Juliet last year. Meanwhile the King’s Company will perform Henry V and As You Like It, directed by artistic director Miles Gregory and Tom Mallaburn respectively.

You can find more details here. 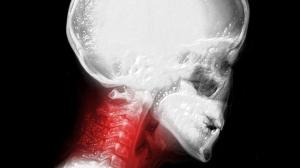 Time to lift the lid on my next directing project: my own adaptation of Schiller’s Mary Stuart, with the current MA Acting (Classical) class at Central.

You can find details and book tickets here.

I may not have done it very well, but I have done it – thus far – by myself. So even though it’s not as I would like it to be, given that I’ve been saying to myself for years that I need a website, I feel a certain small personal glow of achievement.

So if you’re looking, please consider this a work-in-progress. Like art or life.

I’ve recently returned to London from New Zealand, where I directed Romeo and Juliet at Auckland’s Pop-up Globe Theatre. It was a brilliant, extraordinary experience. You can see more pictures from the season, and the audience response, here. The show runs until May 8th (having extended twice, and with more than 30,000 tickets sold).

I’m now working on adapting the text for my summer production at Central – details soon – and on directing the industry showcase for the current cohort of MA Acting.

The rest, I guess, is now history and not news, and you can find it elsewhere on the site …